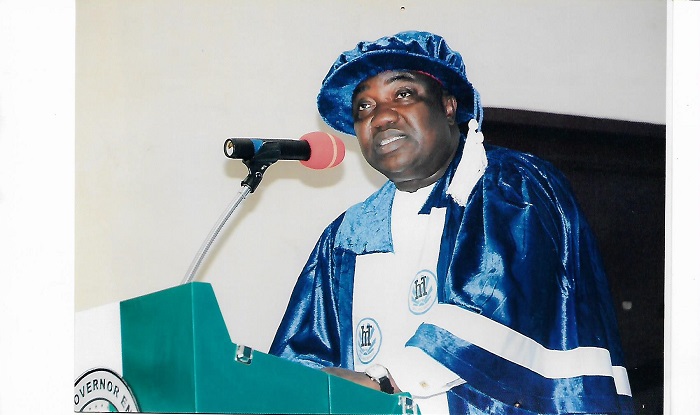 The governor made the assertion at the special convocation of the institution, tagged “32nd to 42nd Consolidated Convocation Ceremony and 45th Anniversary/Home Coming,’’ which took place at the Michael Okpara Square, Enugu, on Saturday.

Newsmen report that the institute of Management and Technology (IMT), Enugu, came into existence under the then East Central State of Nigeria Edict No. 10 of 1973 promulgated by the administrator of East Central State, Ajie Ukpabi Asika. Prior to the establishment of the great IMT, there existed up-till 1967 the College of Technology which offered courses in Engineering and Laboratory Technology leading to the award of Ordinary Diploma.

Earlier, the Chairman, Governing Council of the institution, Deaconess Ifeoma Nwobodo, hailed Ugwuanyi for his profound commitment and dedication to his pledge of transforming the education sector for excellence. She said that upon the inception of the administration, the governing council and management of IMT were irked by the huge backlog of graduands that had not been released by the institution, She added that they saw it as a challenge to clear the backlog which, she said, was the reason for the consolidated convocation. “We are motivated by our governor’s avowed and unparalleled efforts towards the improvement and upgrading of teaching and learning facilities and infrastructure in the institute,’’ she said. Nwobodo said that at 45, IMT had produced numerous men and women who had excelled in their chosen career and making waves across the world.

On his part, the Rector of the institute, Prof. Augustine Nweze, expressed delight at the success of the event and appreciated Ugwuanyi, Nwobodo and other members of the governing council. He also thanked the staff, management and students of the institution for their roles toward the successful conduct of the consolidated convocation. He expressed management’s plan to take conscious steps to henceforth, ensure that IMT convocation held annually. The rector added that “by God’s grace, with the unparalleled support of their visitors, the Governing Council and the cooperation of the Academic Board, management, staff and students, their convocation shall become an annual event. “Here in IMT, we take great pleasure in seeing our graduates move on to successful careers because we are confident that our institution has one of the best employment records for graduates of any institution in Nigeria.’’ On the feats recorded  by administration, he said that from June 10, 2016, that IMT had, in the first phase, commenced programmes in six academic departments in affiliation with the University of Nigeria (UNN) Nsukka. He also said that it included Accountancy, Banking and Finance, Business Administration, Public Administration, Marketing and Statistics. Some illustrious citizens and alumni of the institution were admitted into the IMT Fellowship, known as “FIMT’’ while others were immortalised by naming some facilities in the school after them. Those in the IMT fellowship category (FIMT) include business mogul and renowned philanthropist, Prince Arthur Eze; MD/CEO of Fidelity Bank, Nnamdi J. Okonkwo; Nollywood star actress, Evangelist Patience Ozokwor, who is an IMT product from Fine and Applied Arts and Chairman/CEO of Business Day Media Ltd, Frank Aigbogun. Those immortalised were Prince Arthur Eze, who was named after the expansive EE/Food Tech/Mech Engineering/SLT, to officially become “Chief Arthur Eze Building’’; the Fine and Applied Arts building, is now “Evang Patience Ozokwor Building’’, and the FT Main Building was renamed after Dr Uche Ogar, to now bear “Dr Uche Ogar Building’’. The Best overall graduating HND and ND students from 2007 to 2017 were also unveiled at the event.